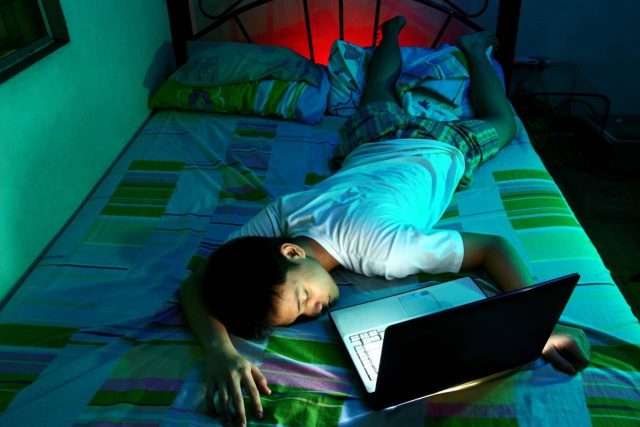 According to recent studies, 60% of people spend as much as 6 hours a day in front of a digital device whether it is a computer, tablet, smartphone or other gadget. All of these devices emit blue light or high-energy visible (HEV) light, which is a known cause of computer vision syndrome, sleep disruptions and possibly other potential dangers to the eyes.  Blue light radiation is also emitted from television screens, electronic devices. fluorescent and LED lighting and yes, even the sun.

What is Blue Light?

Emitted from the sun, blue light is naturally occurring in the world around us. On the spectrum of visible light (light that humans can see), blue light has the highest energy and the shortest wavelength. It is also sometimes known as blue-violet or violet light, which is where ultraviolet (UV) light rays that are just beyond our perception get their name.  Much like ultraviolet light, blue light has both dangers and benefits to our health, particularly to our eyes.

What are the Potential Dangers of Blue Light?

Research is still being done to determine the long-term effects of blue light or high-energy visible (HEV)  light emission, however it is known is that blue light is a cause of computer vision syndrome (CVS) and sleep disruptions.

The high energy and shorter wavelengths of blue or HEV light emit a less consistent flow of light, creating a glare or flickering that can cause eye strain.  Because sharpness and visual contrast are affected by this, the eyes have to work harder to see clearly.  After extended periods of time this can result in headaches, blurred vision, dry eyes, and mental and physical fatigue.

Natural blue light in the atmosphere is known to help regulate the body’s circadian rhythm (which controls your sleep cycles), to boost your mood and level of alertness and to improve memory and cognitive function. However, prolonged exposure to artificial sources of blue light has been shown to reverse these positive effects, causing disruptions in the circadian rhythm which affects sleep, as well as an increased risk of depression. Studies show that using a digital device before bedtime can negatively impact ther amount and quality of your sleep.

Researchers at Harvard University have shown that over time, prolonged exposure to blue light can cause damage to the retina at the back of your eye, which may lead to age-related macular degeneration (AMD) and possibly other serious health and vision problems. AMD is a leading cause of vision loss and low vision.

How Can You Protect Yourself from Blue Light Emissions?

As the dangers of blue light from digital devices emerge, more and more options are becoming available to protect your eyes. The eyes have very limited natural ability to block out blue light radiation so we need to be aware of blue light exposure and how to minimize it.

Computer glasses with blue-blocking lenses, coatings and filters are a good solution for those working on a computer for long periods of time each day. You can also add anti-glare coatings with blue light protection to your regular eyeglass and sunglass lenses. Additionally, there are filters available for devices such as computers, smartphones and tablets, to reduce the amount of blue light radiation that can reach your eyes.

The easiest way to reduce blue light exposure is to take frequent breaks when working on a computer and to reduce screen time overall.

Q & A on Blue Light with the Eye Doctor

Q: I’m hearing a lot about blue light and its danger to eye health. What’s this all about and how can I protect myself?

A:  Sunlight is made up of red, orange, yellow, green, blue, indigo and violet light. When combined, it becomes the white light we see. Each of these has a different energy and wavelength. Rays on the red end have longer wavelengths and less energy. On the other end, blue rays have shorter wavelengths and more energy. Light that looks white can have a large blue component, which can expose the eye to a higher amount of wavelength from the blue end of the spectrum.

The largest source of blue light is sunlight. In addition, there are many other sources:

Blue light exposure you receive from screens is small compared to the amount of exposure from the sun.  And yet, there is concern over the long-term effects of screen exposure because of the close proximity of the screens and the length of time spent looking at them. According to a recent NEI-funded study, children’s eyes absorb more blue light than adults from digital device screens.

Almost all visible blue light passes through the cornea and lens and reaches the retina. This light may affect vision and could prematurely age the eyes. Early research shows that too much exposure to blue light could lead to:

Digital eyestrain: Blue light from computer screens and digital devices can decrease contrast leading to digital eyestrain. Fatigue, dry eyes, bad lighting, or how you sit in front of the computer can cause eyestrain. Symptoms of eyestrain include red

or irritated eyes and difficulty focusing.

Retina damage: Studies suggest that continued exposure to blue light over time could lead to damaged retinal cells. This can cause vision problems like age-related macular degeneration.

So what can you do when frequent exposure to blue light from smart phones, tablets, and computer screens is an issue?

Screen time: Try to decrease the amount of time spent in front of these screens and/or take frequent breaks to give your eyes a rest.

Filters: Screen filters are available for smart phones, tablets, and computer screens. They decrease the amount of blue light given off from these devices that could reach the retina in our eyes.

Talk to an eye care professional about ways to protect your family and your eyes from blue light.